To Visit Korean War Memorial in Phoenix on 21 May

City, State- At 11:00 a.m. on Mon., May 21, 2018, Hannah Y Kim, a woman with a mission, will visit the Korean War Memorial in Phoenix, AZ and present a commemorative wreath. This is part of an ambitious three-month journey visiting Korean War memorials in all 50 states, to honor and remember those who served in that long ago, faraway conflict, 1950-53, and to help promote peace on the Korean Peninsula. Given the alarming level of tensions in the region today, her mission could not be timelier. 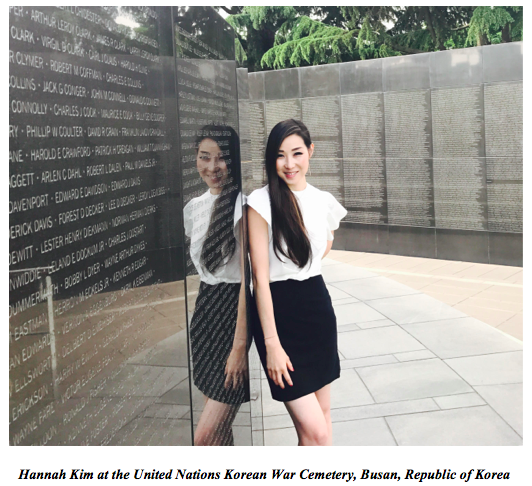 Hannah also hopes that her journey will raise awareness about the Wall of Remembrance, the long-overdue addition to the Korean War Veterans Memorial in Washington, D.C. The Wall was approved by Congress in 2016, but a lack of funding has delayed its construction for two years. As a result, the names of the nearly 37,000 Americans who died in Korea are still waiting to be inscribed for posterity.

Hannah’s devoted activism on behalf of Korean War veterans began in 2008, when she was a 24-year-old graduate student in Washington, D.C. and established Remember727, an organization dedicated to honoring veterans of the so-called “Forgotten War.” Hannah lobbied Congress to enact legislation, signed by President Obama in 2009, that established July 27 as National Korean War Veterans Armistice Day.

She subsequently worked for Congressman Charles B. Rangel, a decorated Korean War veteran, as his communications director and later as his chief of staff. When Congressman Rangel retired in 2017, Hannah embarked on an epic journey around the world, visiting every country that was part of the UN effort during the war. She interviewed 200 veterans to memorialize their stories, because, as she told them, “If you hadn’t fought in Korea, I wouldn’t be here.”

Representatives of the Korean War Veterans Assn. will be present for the brief ceremony, which is open to the public and the media. Following the ceremony, Hannah Y Kim will be available for media interviews.

Training: How To Write A Resolution

January 22, 2022
To Department and District Officers Or Those Managing a Facebook Page/Group

Training: How To Write A Resolution

January 22, 2022
To Department and District Officers Or Those Managing a Facebook Page/Group